On March 17, 2022 the Cayucos Sanitary District Board of Directors adopted NDC Proposal "A" in accordance with the California Voting Rights Act

(a) “At-large method of election” means any of the following methods of electing members to the governing body of a political subdivision:

(1) One in which the voters of the entire jurisdiction elect the members to the      governing body.

(2) One in which the candidates are required to reside within given areas of the jurisdiction and the voters of the entire jurisdiction elect the members to the governing body.

(3) One that combines at-large elections with district-based elections.

(d) “Protected class” means a class of voters who are members of a race, color, or language minority group, as this class is referenced and defined in the federal Voting Rights Act of 1965 (52 U.S.C. Sec. 10301 et seq.).

14027  An at-large method of election may not be imposed or applied in a manner that impairs the ability of a protected class to elect candidates of its choice or its ability to influence the outcome of an election, as a result of the dilution or the abridgment of the rights of voters who are members of a protected class, as defined pursuant to Section 14026.

14028  (a) A violation of Section 14027 is established if it is shown that racially polarized voting occurs in elections for members of the governing body of the political subdivision or in elections incorporating other electoral choices by the voters of the political subdivision. Elections conducted prior to the filing of an action pursuant to Section 14027 and this section are more probative to establish the existence of racially polarized voting than elections conducted after the filing of the action.

(c) The fact that members of a protected class are not geographically compact or concentrated may not preclude a finding of racially polarized voting, or a violation of Section 14027 and this section, but may be a factor in determining an appropriate remedy.

(d) Proof of an intent on the part of the voters or elected officials to discriminate against a protected class is not required.

(e) Other factors such as the history of discrimination, the use of electoral devices or other voting practices or procedures that may enhance the dilutive effects of at-large elections, denial of access to those processes determining which groups of candidates will receive financial or other support in a given election, the extent to which members of a protected class bear the effects of past discrimination in areas such as education, employment, and health, which hinder their ability to participate effectively in the political process, and the use of overt or subtle racial appeals in political campaigns are probative, but not necessary factors to establish a violation of Section 14027 and this section.

14029  Upon a finding of a violation of Section 14027 and Section 14028, the court shall implement appropriate remedies, including the imposition of district-based elections, that are tailored to remedy the violation.

14030  In any action to enforce Section 14027 and Section 14028, the court shall allow the prevailing plaintiff party, other than the state or political subdivision thereof, a reasonable attorney’s fee consistent with the standards established in Serrano v. Priest (1977) 20 Cal.3d 25, 48-49, and litigation expenses including, but not limited to, expert witness fees and expenses as part of the costs. Prevailing defendant parties shall not recover any costs, unless the court finds the action to be frivolous, unreasonable, or without foundation. 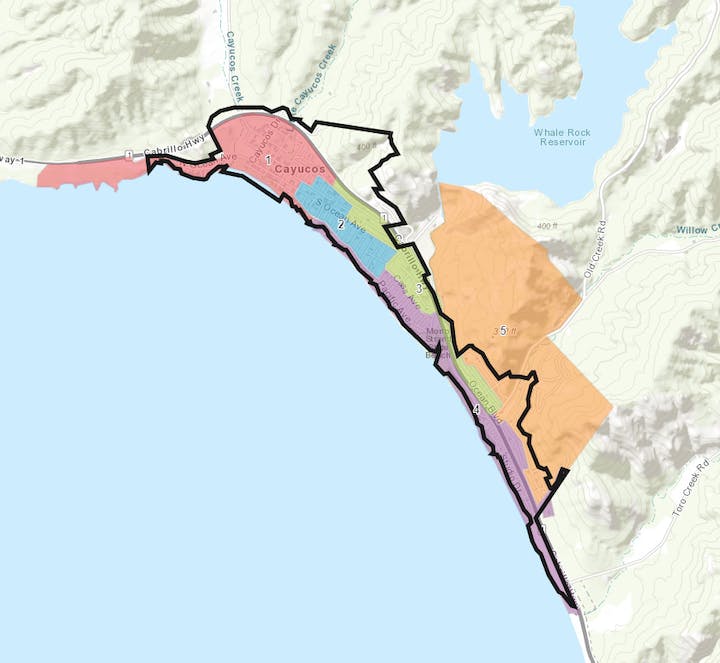 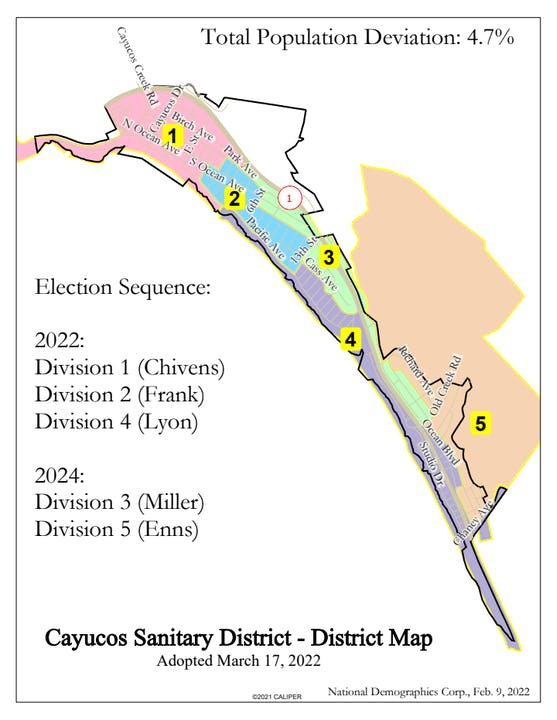 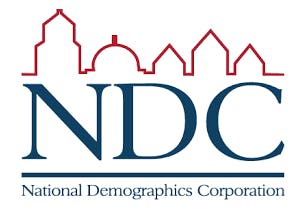 Cayucos Sanitary District is fully committed to providing accessible facilities, elements and channels of communication to all members of the public. As part of this commitment, Cayucos Sanitary District has a policy of providing an accessible website compatible with the Web Content Accessibility Guidelines (WCAG 2.1) and commercial screen reading software. All features of the website are coded to allow individuals with vision and other impairments to understand and use the website to the same degree as someone without disabilities. We welcome feedback and can often resolve issues in a timely manner if they arise.

If you need any special assistance or accommodations

In addition to testing with users with a wide range of disabilities and coding our website to WCAG standards, Cayucos Sanitary District regularly scans its website to ensure ongoing compliance, and makes timely changes to any inaccessible changes, if any are found. In our ongoing commitment to transparency, we make the last three months' reports available to the public.

Please note that this site may link out to third-party websites, such as state or federal agencies, that do not have accessible content. This site may also include documents provided by third parties included in our agenda packets, for example. While we cannot control the accessibility of content provided by third parties, we are happy to assist any member of the public with reading and accessing content on our site.

See an opportunity for us to improve? Please contact our accessibility officer or call us at 8059953290.

We are committed to your ability to access all content, and we will respond to all requests as soon as possible.

Thank you for reporting this accessibility issue. We'll be in touch soon.
There was an error saving your report. Please make sure you have entered all required fields and try again.
This site is protected by hCaptcha and its Privacy Policy and Terms of Service apply.